I’ve always loved hiking and backpacking, and have hiked and camped in a wide variety of environments – swampland, deserts, and mountains. And have had to learn to protect against many of the small and large critters of these environments – mosquitos, ticks, alligators, scorpions, rattlesnakes, bears, mountain lions, etc.

Before moving to Montana, I’d never come across anything that worried me. But the Grizzly bear (Ursus arctos horribilis), got into my head and I found myself thinking about Grizzly bears on every hike and every backpacking trip.

My fear of them felt out of proportion to the risk. Friends who grew up in Montana and are avid hunters and backpackers seemed less concerned about bears. They’d assure me that there were a dozen more scenarios more likely to mess me up in the wilderness than a Griz. And of course, it’s true.

Consider that Yellowstone National Park contains one of the highest concentrations of the bruins in the lower 48, approximately 690 Grizzlies, and sees around 4 million visitors annually.

My odds of being attacked by a Grizzly are pretty low. I’m only a little more likely to get struck by lightning. However, if I were to get attacked, then it would be a terrifying, and potentially life-ending encounter.

Since it’s not in my nature to play the odds, I felt I needed to learn as much as I could about Grizzlies. I began my study, as most of us do today, on the internet. I combed through Forest Service pages and documents, read online media articles, blog posts, and watched YouTube videos.

Though I learned a lot about bears, the information about how to protect yourself against an aggressive one was, shall we say, inconclusive.

In 2018, I found Tactic Montana’s Survive the Griz class in Bozeman, Montana.

TACTIC was founded in 2009 by Chris Forrest and is based on his extensive background as a Navy SEAL. TACTIC provides tested, military techniques to civilians so they can protect their families and avoid victimization.

Chris’ Survive The Griz is a popular, well-attended class. And if you’re interested, there is an upcoming class on April 27-28, 2019. There’s no other class like it anywhere, I assure you.

Things that attracted me to the class:

Learning To Survive The Griz 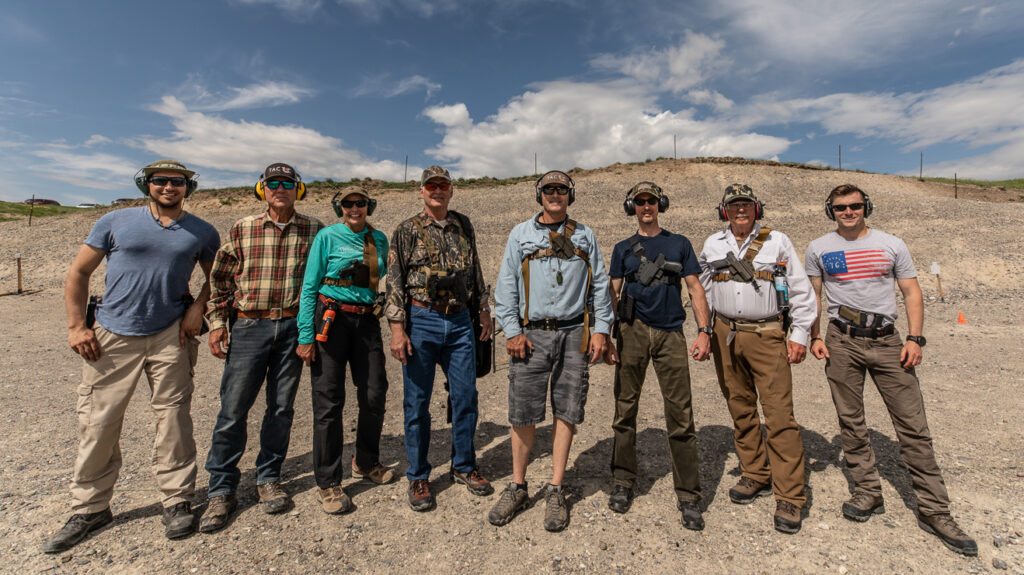 Survive The Griz course, May 2018. Image courtesy of Nick Costas

On a warm, sunny day in May, North of Bozeman Montana, thirty yards away the Grizzly bear sat. Thirty yards doesn’t sound that close. But when you’re looking at an animal that can close that distance in under two seconds, it doesn’t feel far enough.

The eight-hundred-pound Grizzly, Adam, didn’t appear interested in us at all. Adam sat in the back of a pick-up truck, in a cage, waiting. And on this warm Montana day, we were going to meet Adam, up close and personal. 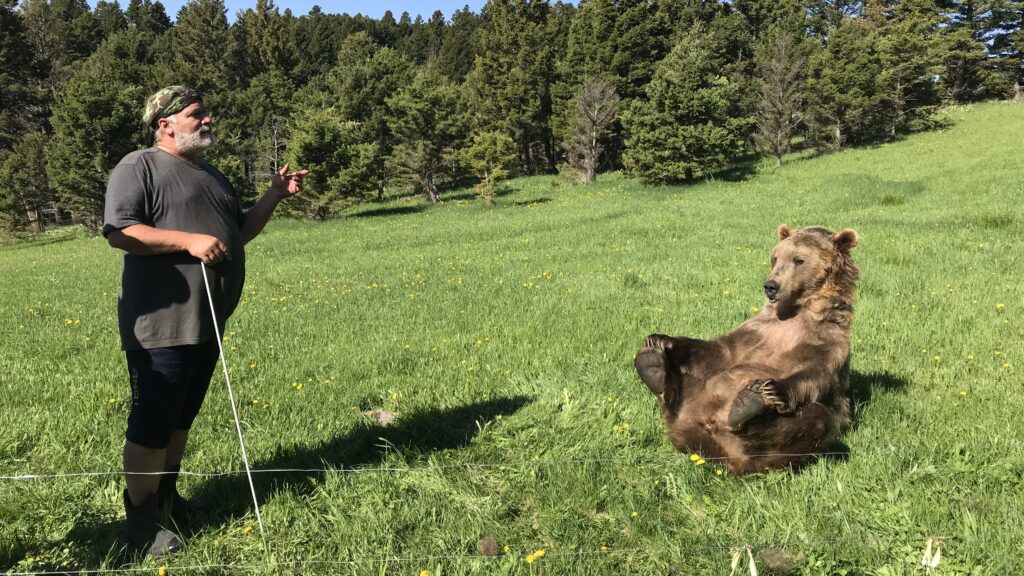 Troy answers questions about Grizzlies with his assistant, Adam.

Getting to meet a Griz in person is what immediately attracted me to Chris’ class. Chris wants his students to be able to see, feel, and smell a Grizzly bear. This approach made perfect sense.

Adam’s trainer, Troy, owns Animals of Montana, a wildlife casting agency. Troy drove Adam in the truck up the steep hill behind the property, and like a circus caravan, we all followed. At a clearing surrounded by acres of electric fence, Troy released Adam into the make-shift pen.

Adam was born into captivity. So captivity and human interaction are all he’s ever known. Troy explained that even though Adam has all his bear instincts, his training is overpowering. Knowing this is one thing, but convincing my primitive brain that the Grizzly we’re standing twenty feet from is not dangerous is another.

Troy and Adam put on a short show for us, demonstrating what Adam could do. At the same time, he talked freely about Grizzly habitat, behavior, and anatomy. He answered questions as they came up. And at the end of the hour, we each had the opportunity to step inside the wire and hand-feed Adam a treat.

Standing face-to-face with an eight-hundred pound Grizzly as it gently takes a treat from your hand is a surreal experience. But looking into Adam’s eyes was akin to looking into the eyes of a lab, in the body of a Griz.

Following the morning with Troy and Adam, we shifted gears and locations and moved into Chris’ classroom near four corners outside of Bozeman, Montana.

Here we watched a video where Todd Orr told his survival story of being attacked not just once, but two times, by the same female Grizzly. Unfortunately, Todd was not able to make the class in person, but I learned a few things about his encounter than I had already known before.

If you’re interested in more information about Todd’s story, you can watch an interview Jason Matzinger did with Todd Orr at the YouTube link below.

After the video and discussion, we talked about the use of bear spray, and it’s effective, or as in Todd’s case in-effectiveness under certain circumstances. Then, headed out to Tactic’s private shooting range to test out our bear spraying ability.

Once on the range, we did several things. First, we stood by and watched Chris spray an active can of bear spray, downwind of us of course. It wasn’t impressive. The thirty-foot reach claimed on the label appears a lot shorter than you’d want it if you were dealing with an aggressive 400 plus pound animal bearing down on you.

Our first bear charge simulation required us to draw our cans of inert bear spray, remove the safety cap, and spray a “bear” charging at us at 35 mph (55 kph) from a distance of 50 feet (15 meters) which would take the Griz just over one second.

What we quickly discovered, was that if you were facing this kind of threat, with little to no warning, then your best hope of getting your spray into action was to either have the can in your hand or learn to fire from the holster.

Day two of the Survive the Griz class was centered around the use of a firearm as a defensive tool against a Grizzly attack. Starting in the classroom, we spent several hours going over safe gun handling practices and range rules.

On the range, Chris and his instructors led us from basic gun handling, targeting and shooting, to drawing and firing against a moving target. Without feeling rushed, the class moved smoothly from one evolution to the next.

The instructors worked with each of us personally and made individual adjustments as necessary. Chris maintains a high instructor to student ratio so that everyone gets the instruction they need. With a couple of changes to my grip, Chris improved my accuracy significantly.

The final test was to put holes in paper on the simulated bear charge. Though I was much faster at the draw and managed to get two shots off, I missed most of them. Only one out of six shots were on target.

Personal take-aways from the class:

Following the class, I continued researching and following the story of the Grizzly in Montana. A lot is happening right now. For example, in 2017 the U.S. Fish & Wildlife Service removed Yellowstone Grizzlies from the threatened species list. And a U.S. District Judge returned them to the list. It turns out this back and forth has been going on since 2003.

It also wasn’t entirely settled for me as to how I should conduct myself when backpacking and hunting in Griz country. It’s one thing to have these safety and defense concepts in my mind, but an entirely different reality when walking among bears. More reading generated more questions, led to more reading. I felt like I was digging into a dry well.

Some of the questions I was trying to find answers to were:

My next article will take a closer look at three research papers routinely cited when discussing bear spray and firearms as protection against aggressive bears.